The Betrayal, The 1919 World Series and the Birth of Modern Baseball, by Charles Fountain

Charles Fountain tells how a child’s game, played by grown men, was shown to be corrupt. In the early years of professional baseball, gamblers and ballplayers worked the same side of the street. In 1919 came a day of reckoning. The fix was in, as it had been so often in baseball games designed for public entertainment and open to unscrupulous gain.

The White Sox were heavily favored to beat the Cincinnati Reds, but the Reds won, five games to three. Eight members of the White Sox (from then on known as the Black Sox) were suspended for throwing the games. A great player, Shoeless Joe Jackson, so named because he once played a game in his stocking-feet because his shoes hurt his feet, was one of the suspended players. Denials followed accusations, and continue to this day. But after this series, a commissioner was put in charge of the league and rules against gambling were put in place. Modern baseball was born. 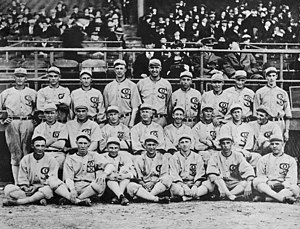 Today players are paid richly. They are among the princes of our culture. No need for them to slip into the shadows of alleys with gamblers and criminals.  It’s a wonder that one such as Pete Rose would even consider betting on a game.