Half-Earth, Our Planet’s Fight for Life by Edward O. Wilson

Biologist and naturalist E. O. Wilson observes how little we know about other life-forms on earth, and therefore how little we care about their astonishingly rapid disappearance. He proposes a simple and elegant solution to our stressed and threatened planet: commit half of the earth’s surface to nature. To Wilson, biodiversity is the key to the healing of our planet’s current climatic disease, and maybe one step toward healing our boiling and raging human strife. He argues that the earth does not belong to us.

I am convinced that only by setting aside half the planet in reserve, or more, can we save the living part of the environment and achieve the stabilization required for our own survival.  p. 3

As Wilson tells the story of creatures of earth he points out that hardly any of us care about more than a few domesticated creatures around us that we can control and respond to with emotion. We give very little thought to the countless other life-forms on earth. In this book Wilson repeats that the healing of the planet and the restoration of our own spiritual well-being depends on the lively presence of other creatures here with us on earth.

He writes that we live in the Anthropocene Epoch, the final age of earth in which humans view the planet as their very own to use and exploit as we please. Wilson nicknames our era the Eremocene or The Age of Loneliness in which human populations change the landscape across the face of the earth and populate it with our own kind and with domesticated herds and fields spreading out widely to meet our own increasing needs for more of everything. 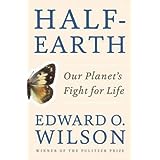 Retired from Harvard, Wilson is the world authority on ants. In this book he tells stories of many different life-forms, small and large, for example, the rhinoceros. Twenty-seven thousand rhinos remain on earth. One hundred years ago millions of rhinos roamed Africa and Asia. He recalls a night meeting with a rare breeding pair of Sumatran rhinos just arrived at the Cincinnati Zoo. What he tells about his meeting with the two sounds like a blessing, a communion, a spiritual moment of importance not only to Wilson but to all of us, a sign of our creaturely connection with other living things. He was invited by the director of the zoo to view the pair of rhinos, still in their shipping crates. He asked the director if he could touch the animals. The director nodded.

…I did so, once each, quickly and softly, with the tips of my fingers. My feeling at the moment was spiritual and lasting, one I can’t explain in words…even to myself.  p. 33

One time Wilson sent a letter to other senior scientist naturalists similarly committed to preserving large areas of wilderness with diverse populations of living things. He asked them to name their models of wilderness and biodiversity on earth, in other words, to name their favorite places.

The three environments in North America noted by the responders are the Longleaf Pine Savanna of the American South, the Madrean Pine-Oak Woodlands of the Southwest United States and Mexico, and the Redwood Forests of California.

One thought on “Half-Earth, Our Planet’s Fight for Life by Edward O. Wilson”