The Last Shift is the final collection of poems by Philip Levine. His friend Edward Hirsch edited and published the book after Levine’s death. In the introduction, Hirsch writes that Levine believed in poetry and was fierce in his loyalty to the past. For those of us who are drawn to the spirits that hang out in the neighborhood bars, at the local church, and with the overnight shift workers to whom dusk and dawn mean something different than they mean to most people, our ears were tuned to Levine’s voice. Levine was a poet of the rain and of trains, reminding us of an old American manufacturing world, and of an old dream world. In Boston tonight the temperature is unseasonably warm for the last week of February.

Outside the window drops caught
on the branches of the quince, the sky
distant and quiet, a few patches of light
breaking through. The day is fresh, barely
begun yet feeling used. Soon the phone
will ring for someone, and no one
will pick it up, and the ringing will go on
until the icebox answers with a groan.

The lost dog who sleeps on a bed of rags
behind the garage won’t appear
to beg for anything. Nothing will explain
where the birds have gone, why a wind rages
through the ash trees, why the world
goes on accepting more and more rain. 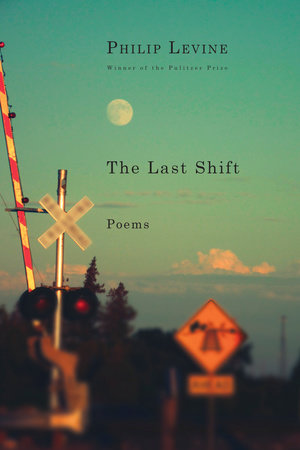