Ali: A Life by Jonathan Eig 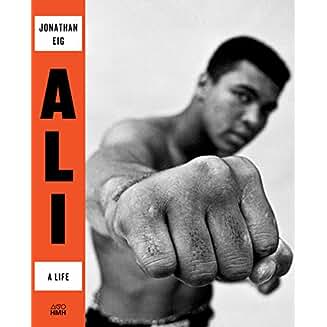 A major figure of the twentieth century, there is a lot to tell about Muhammed Ali, as evidenced in this 640-page brick of a biography. A black athlete from Louisville, with so much wit and charisma that the whole world, not only boxing fans, knew his name and recognized his face. Born for television, Ali bullied and baited opponents with rhymes. He enraged people–mostly white people–with bravado and arrogance. Courageous, ambitious and adaptable, he fought too long. His last matches seemed like exhibitions of survival, or self-sacrifice. Leaning back against the ropes to cushion punches from younger, stronger fighters, he covered himself with his arms and gloves in a strategy he called rope-a-dope, a term that was one-half word play and one-half insult of dimmer opponents. A few years after his last fight, Ali was diagnosed with Parkinson’s disease.

For resisting the Vietnam draft, Ali lost three years of his boxing career. He became a symbol of opposition to authority for many young people, and a hero. He explored spiritual and racial matters through the Nation of Islam. He was a celebrity athlete and cultural icon whose renown was rivaled, in his time, by only a few most popular musicians and movie stars. My review of Ali: A Life will be published in The Christian Century.